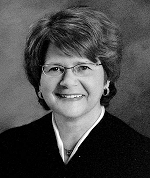 Justice Carol Ronning Kapsner was born November 25, 1947, in Bismarck, North Dakota, and raised in Underwood and Bismarck. She received a Bachelor of Arts degree in English literature from the College of St. Catherine in St. Paul, Minnesota, in 1969; Phi Beta Kappa; studied 17th-century English literature at Oxford University; and, as a Woodrow Wilson fellow and Indiana University fellow, received a Master of Arts degree in English literature from Indiana University in 1971. She received her Juris Doctor degree from the University of Colorado School of Law in Boulder, Colorado, in 1977. She started the law firm of Kapsner and Kapsner in Bismarck in 1977 and remained in private practice until 1998. In 1980, she served as president of the Burleigh County Bar Association, and from 1993-1995, served on the Board of Governors of the State Bar Association of North Dakota. She was appointed by the Bar Association to serve on the Judicial Conference from 1988 to 1996. In October 1998, Governor Edward T. Schafer appointed Justice Kapsner to fill the vacancy created by the retirement of Justice Herbert L. Meschke. In 2000 and 2010, she was elected to 10-year terms. She chairs the Judicial Planning Committee, co-chairs the Commission to Study Racial and Ethnic Bias in the Courts, and serves on the Personnel Policy Board. She served on the Judicial Education Commission, the Committee on Tribal and State Court Affairs, and chaired the Court Services Administration Committee. She served on the ABA Standards Review Committee. Her husband, John C. Kapsner, is a lawyer. They have two children. Justice Kapsner retired July 31, 2017, having served 18 years, 9 months, and 2 days on the Bench.