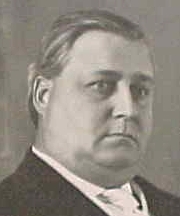 Justice Fisk was born in Morrison, Illinois, on March 11, 1862. He received his elementary and secondary education in the Morrison schools. He then attended Northern Illinois College at Fulton, Illinois, and received his law degree in 1883 at age 21. He came to the Dakota Territory and was admitted to the Bar in 1886 and immediately started a practice in what is now Larimore, North Dakota. Shortly thereafter, he moved to Grand Forks and practiced law until 1897. During this period he served as Grand Forks City Attorney for two years and also functioned as an Assistant United States Attorney. In 1897 he was elected to the position of District Judge for the First Judicial District with chambers in Grand Forks and served in that capacity for ten years. In the 1906 general election he defeated Justice Knauf for the position on the Supreme Court left vacant when Justice Young resigned. He assumed office in January 1907 at age 44 and was reelected to a full term in 1910. He was defeated by Luther Birdzell in the 1916 general election after serving ten years on the Supreme Court. Justice Fisk returned to private practice in Minot, North Dakota. He continued in practice until 1923 at which time he was appointed Referee of the State Guaranty Fund Commission. He served in that position until it was abolished, a short time before his death. Justice Fisk died on May 8, 1932, at age 70.