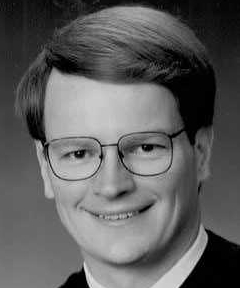 Dale V. Sandstrom is a fifth-generation North Dakotan. He was born March 9, 1950, in Grand Forks, North Dakota, and attended the Fargo school system. He received his B.A. degree from North Dakota State University and in 1975 received his juris doctor degree from the University of North Dakota School of Law. He worked for the United States Senate under Senator Milton R. Young; served on the staff of the North Dakota Criminal Justice Commission; and served as an Assistant Attorney General for six years, heading the Consumer Fraud and Antitrust Division. In 1981, Governor Allen I. Olson named him State Securities Commissioner. Effective May 5, 1983, he was appointed to the Public Service Commission. In 1984 and 1990 he was elected to six-year terms on the Commission, and he served two terms as President of the Commission. In 1992, he was elected Justice of the Supreme Court, assuming office on December 31, 1992. He was reelected to ten-year terms in 1996 and in 2006. Justice Sandstrom is a graduate of the National Judicial College. He chaired the Joint Procedure Committee and the North Dakota Advisory Commission on Cameras in the Courtroom, and was a member of the Joint Committee on Attorney Standards. He is past chair of the Court Technology Committee, the North Dakota Judicial Conference, and the North Dakota Judges Association. He is married to District Judge Gail Hagerty. They have three children. Justice Sandstrom did not seek reelection and retired on December 31, 2016, having served 24 years and one day on the Supreme Court, the seventh longest serving Justice since statehood.