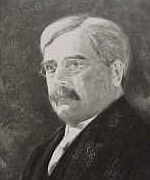 Justice Morgan was born in Coalport, Ohio, on November 8, 1849. When he was a young child his parents moved to Wisconsin and he was educated in the common schools, at Spring Green Academy, and at Plattville State Normal School. He took a special course for a year at Wisconsin State University. After leaving Wisconsin State University he taught school for a time in Ironton, Wisconsin, and later was principal of a Chilton, Wisconsin school. He was elected Clerk of the Court of Sauk County, and during his terms he read law with several judges. He was admitted to practice in Wisconsin in 1879. In 1881 he resigned as Clerk of Court and moved to the Dakota Territory to practice law. In 1883 he moved to Devils Lake and practiced until he was elected Judge of the 2nd Judicial District in 1889. During the period he practiced in Devils Lake, he served four years as State's Attorney for Ramsey County. After 11 years on the District Court Bench he was elected to Justice Bartholomew's position on the Supreme Court in 1900. He was 51 years of age when he came on the Supreme Court and, after serving approximately ten years and eight months, he resigned on August 31, 1911, for reasons of ill health. After retiring, he moved to California where he remained until his death at age 62 on May 11, 1912.