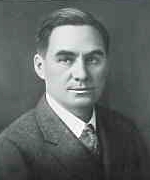 Justice Goss was born in Rockford, Michigan, on December 8, 1872. He received his early education in the Rockford school system. He then attended the University of Michigan and received his law degree in 1894 and a master's degree in 1895. He practiced in Grand Rapids for a short time prior to moving to Bottineau, North Dakota, where he opened a law office. He practiced in Bottineau for approximately nine years during which time he served as Bottineau County State's Attorney for two terms. He was elected Judge of the Eighth Judicial District in 1904 and then moved to Minot. He defeated Justice Ellsworth for a position on the Supreme Court in the 1910 election and assumed office at age 38. Justice Goss was defeated in his attempt for reelection in 1916 and returned to Minot to practice law, having served six years on the Bench. He continued his practice in Minot until his death at age 57 on March 23, 1930.