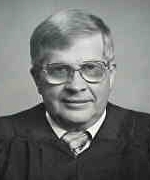 Justice Meschke was born March 18, 1928, and raised on a small ranch north of Medora, North Dakota. He received his high school education in Belfield, North Dakota, and attended Jamestown College, where he obtained a B.A. degree in Economics in 1950. He attended the University of Michigan and received a juris doctor degree in 1953. Admitted to the North Dakota Bar in 1953, Justice Meschke served as law clerk to United States District Judge Vogel at Fargo from 1953 to 1954. In 1954 he joined a law firm in Minot and practiced with that firm until 1985. He served in the North Dakota House of Representatives from 1965 to 1966 and in the Senate from 1967 to 1970 and also served as Senate Minority Leader. He was appointed to the North Dakota Supreme Court by Governor George A. Sinner in January 1985 and elected to a four-year term in 1986. He was reelected to a ten-year term in November of 1990. Justice Meschke retired on September 30, 1998, after serving 13 years and eight months on the Bench. Following his retirement from the Court, he returned to Minot, North Dakota, and served as of counsel to Pringle and Herigstad, P.C. He died May 19, 2017 in Minot, North Dakota.