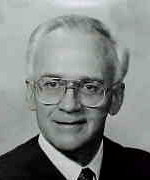 Justice Johnson was born in Minot, North Dakota, on March 28, 1938. He attended Minot State College and transferred to the University of North Dakota at Grand Forks, where he received a bachelor of philosophy degree in 1960. He received a juris doctor degree from the University of North Dakota School of Law in 1962. Following admission to the Bar, he was admitted to the United States Army Judge Advocate General's Corps. After three years of active duty, including a tour in Washington, D.C., handling court martial appeals, he returned to North Dakota. He then joined a law firm in Fargo for several years and also served as Assistant State's Attorney for Cass County. In June 1974, Justice Johnson was appointed to the Supreme Court to fill the seat vacated by Justice Teigen. He was defeated in the election for the balance of the term in 1974 and left the Court to return to private practice in Fargo on January 9, 1975, after serving seven months. After the resignation of Justice H. F. Gierke III, Governor George Sinner appointed Johnson to the Court on February 11, 1992. He served until January 1, 1993, after an unsuccessful election bid to fill out the remaining term. Justice Johnson returned to private practice in the Fargo law firm of Wold Johnson, P.C.