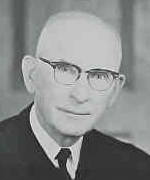 Justice Morris was born in Bordulac, North Dakota, on January 2, 1893. He received his high school and college education in Cincinnati and subsequently received his law degree from the University of Cincinnati Law School. He practiced law in Carrington, North Dakota, until the outbreak of World War I. After serving in the war, he returned to Carrington, where he resumed his practice, and served as City Attorney for a time and as Foster County State's Attorney for two terms. In the summer of 1928, he was appointed Assistant Attorney General and, in November of 1928, was elected Attorney General and served in that position until 1932. He then practiced law in Jamestown in 1933 and 1934. He ran for election to the Supreme Court in 1934 and defeated Justice Moellring to win a ten-year term beginning in 1935. He was 41 years of age when he assumed office and was reelected in 1944 and 1954. He took approximately a year's leave of absence to serve as a trial judge for the War Crimes Tribunal in Germany after World War II. Justice Morris served the Court for almost 30 years. After his retirement from the Bench, he served several years as Supreme Court Commissioner. Justice Morris resided in Bismarck until his death on July 20, 1980, at age 87.