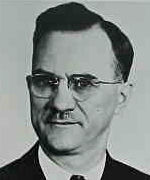 Justice Johnson was born in Akrens, Iceland, on April 30, 1896. He came to the United States with his parents in 1900. He received his early education in the McHenry public schools and graduated from Bottineau High School in 1917. He enlisted in the Army in the fall of 1917 and served until May 1919. He received a bachelor of arts degree from the University of North Dakota in 1924 and his law degree in 1926. He was admitted to the North Dakota Bar in 1926 and started practice in McHenry County. He served as McHenry County State's Attorney for ten years and was elected North Dakota Attorney General in 1944 and 1946. He resigned as Attorney General on September 1, 1948, and entered private practice in Bismarck. He was appointed to the Supreme Court on April 1, 1954, to fill the position left vacant by the death of Justice Christianson. He was 57 years of age when he assumed office and, in the 1954 general election, was elected to serve out Justice Christianson's term. He was reelected to a ten-year term in 1958 but died at age 62 on December 2, 1958, after serving approximately four years and eight months.