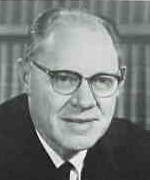 Justice Teigen was born near Tolna, North Dakota, on September 27, 1908. He graduated from Edmore High School in 1927. He then attended the University of North Dakota and received a bachelor of science degree in 1931 and a law degree in 1934. He was admitted to the North Dakota Bar in 1934. With the exception of a two-year period as a special agent for the F.B.I., he practiced law in Devils Lake until 1954. He was also Ramsey County State's Attorney from 1937 to 1943 and from 1945 to 1946. He assumed the position of District Judge for the Second Judicial District in 1954 and served in that capacity until he was appointed to the Supreme Court to replace Justice Grimson. He assumed office on January 13, 1959, at age 50. He was elected to a ten-year term in 1960 and reelected in 1970. He resigned in July 1974 after 15 years and six months of continuous years on the Bench. Following his retirement from the Court, Justice Teigen accepted an appointment as an Administrative Judge with the Social Security Administration in 1975. His terminal illness forced his resignation from the Social Security Administration in February 1978. Justice Teigen died on May 26, 1978, at age 69.