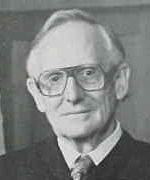 Justice Vogel was born in Coleharbor, North Dakota, on December 6, 1918. He received his B.S. degree from the University of North Dakota in 1939 and his law degree from Minneapolis-Minnesota College of Law in 1942. He was admitted to the Minnesota Bar in 1942 and the North Dakota Bar in 1943. He practiced law in Garrison from 1943 to 1954. During that time, he served as McLean County State's Attorney for five years. From 1954 to 1961 he served as United States Attorney in Fargo, and practiced in Mandan from 1961 to 1973. In 1973 he was appointed to the Supreme Court, and in 1974 he was elected to finish Justice Strutz's ten-year term. Justice Vogel served five years and two and one-half months before resigning from the Supreme Court. After his resignation, he joined the staff of the University of North Dakota School of Law as a professor and established the Vogel Law Firm in Grand Forks. Justice Vogel died January 28, 2005, at age 86.