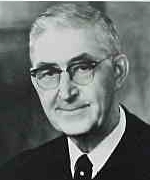 Justice Burke was born in Rolla, North Dakota, on October 24, 1896. He was educated in the public schools of Rolla, Devils Lake and Washington, D.C. He served in the Navy for a time during World War I and, upon being discharged, continued his education and received his B.A. degree from Harvard University. He received his legal training studying under Usher L. Burdick and his father, John Burke. Upon being admitted to the North Dakota Bar, he started a practice in Fargo and in 1929 was named an Assistant Attorney General and served in that capacity until 1933. He served in the State Legislature in 1935. In 1938 Justice Burke defeated P. O. Sathre and was elected to the Supreme Court to fill his father's unexpired term. He was 42 years old when he assumed office and was reelected in 1946 and 1956. He died in office at age 69 on March 20, 1966, after serving approximately 27 years and three months on the Court.