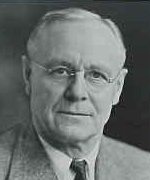 Justice Nuessle was born May 5, 1878, in North Boston, Erie County, New York. In 1886 he came with his parents to the Dakota Territory and settled on a farm near Emerado in Grand Forks County. He received his early education in the Grand Forks area public schools, and his higher education at the University of North Dakota, where he received his bachelor of arts degree in 1899, and his law degree in 1901. After being admitted to the Bar he opened an office in Goodrich, North Dakota. In 1904 he moved to Washburn and was elected State's Attorney for McLean County and served four years in that capacity. He was elected to the District Court Bench in 1912 and served the Sixth and Fourth Judicial Districts until his election to the Supreme Court in 1922 at age 44. He was reelected in 1928, 1934 and 1940. After serving 28 years, he retired at the expiration of his term on December 31, 1950. Justice Nuessle remained in Bismarck until his death, at age 80, on March 30, 1959.