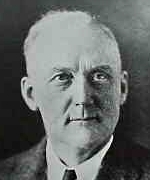 Justice Christianson was born in Brunmundalen, Norway, in 1877. He came to the United States with his parents in 1882. He spent his childhood days in Polk County, Minnesota, and received his early education in the Minnesota public schools. He was, for the most part, self-educated; but he attended the Law Department of the University of Tennessee and was admitted to the Bar in 1889. He moved to North Dakota in 1900 and was admitted to the North Dakota Bar on March 27th of that same year. Justice Christianson immediately opened an office in Towner, North Dakota, where he practiced until his election to the Supreme Court. During his practice in Towner he served as State's Attorney from 1901 until 1905. He was elected to the Supreme Court in 1914 at age 37. He was reelected to the Court in 1920, 1926, 1932, 1938 and 1948. Justice Christianson died in office at the age of 76 on February 11, 1954, after serving on the Court for 39 years and one month.