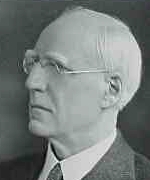 Justice Burr was born in Pitrodie, Perthshire, Scotland, on February 25, 1871. He lived with his parents in Trinidad and Ontario until coming with them to the Dakota Territory in September 1883. He pursued his higher education at the University of Michigan and received a LL.B. degree and a LL.M. degree in 1894. He later received an honorary doctor of laws degree from the University of North Dakota. He was admitted to the North Dakota Bar in 1894 and was elected State's Attorney of Bottineau County that same year. He was reelected State's Attorney in 1900 and 1902. In 1908 he was elected as the Ninth Judicial District Judge and served in that capacity until 1919, when the judicial districts were revised and he became Judge of the Second Judicial District. On September 1, 1926, Justice Burr was appointed to the Supreme Court by Governor Sorlie to succeed Justice Johnson. At the time of his appointment, he was 55 years of age. He was elected to a full term in 1928 and was reelected in 1934 and 1942. He retired from the Supreme Court on September 15, 1949, due to disability, after serving approximately 22 years, ten and one-half months. Justice Burr died on February 8, 1951, at age 79.