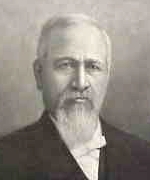 Justice Wallin was born in New York on February 12, 1836. He received the majority of his education in Chicago. Justice Wallin received his legal education at the University of Michigan. He was admitted to the Michigan Bar in 1862 and also the Illinois Bar. He served in the Army in 1861 and 1862, reenlisted in 1864, and was finally mustered out in 1865. After the war he moved to Minnesota and practiced in St. Peter and then in Redwood. He held the office of County Attorney in both Nicollet and Redwood Counties. In 1883, he moved to Fargo, Dakota Territory, and practiced law until elected, at age 53, as one of the first three justices of the North Dakota Supreme Court. He received a seven-year term and was reelected in 1896. Justice Wallin retired at the end of his term on December 31, 1902, after having served approximately 13 years and one month. He had declined renomination and did not resume private practice because of his increasing deafness. Justice Wallin died January 9, 1923, at age 86.