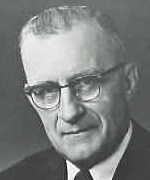 Justice Strutz was born on May 5, 1903, in Milbank, South Dakota. He attended elementary and secondary schools in Jamestown and graduated in 1925 with a bachelor of arts degree from Jamestown College. He taught high school for two years and then entered the University of North Dakota School of Law in the fall of 1927 and graduated with a juris doctor degree in 1930. Justice Strutz practiced law in Jamestown from 1930 until April 1933. He then moved to Bismarck and practiced until he was appointed Attorney General in December of 1937. As Attorney General, he replaced P. O. Sathre who had been appointed to the Supreme Court. He was elected Attorney General in 1938 and reelected in 1940 and 1942. He was an unsuccessful candidate for Governor in 1944. After leaving the Attorney General's office, he practiced law in Bismarck until he was appointed to replace Justice Johnson on the Supreme Court. His appointment became effective on April 11, 1959, and he was 54 years of age when he assumed office. He was elected in 1960 to the eight remaining years of Justice Johnson's term and was reelected in 1968. Justice Strutz served on the Court for 14 years and one month. He died on June 16, 1973, at age 70.