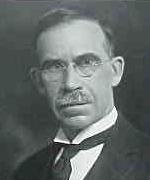 Justice Bruce was born in Madras, India, on April 15, 1866, to Scottish parents. His father, a General in the British Army, was stationed in India at the time of his birth. He received his elementary education in England, and in 1881, at age 15, he was orphaned and came to the United States by himself. He worked as a farm laborer in Minnesota for a number of years and then entered the University of Wisconsin and received his law degree in 1892. He practiced for a short time in Wisconsin and Illinois and served on the legal staff of the Wisconsin Central Railway Company and the Illinois State Board of Factory Inspectors. In 1898, he discontinued the practice of law and began a teaching career at the University of Wisconsin School of Law. In 1902 he came to North Dakota to serve as Dean of the School of Law at Grand Forks. He served as Dean until October 31, 1911, when Governor Burke appointed him to fill the position on the Supreme Court left vacant when Justice Morgan resigned. He assumed office at age 45 and was elected to a full term in 1912. He resigned from the Court on December 1, 1918, after serving approximately seven years and one month, to reenter the teaching profession. He moved to Minnesota and taught at the University Law School from 1919 to 1922 and then accepted a position at Northwestern University Law School where he remained until his death at age 68 on December 6, 1934.