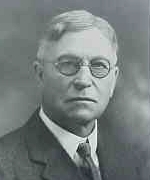 Justice Spalding was born in Craftsbury, Vermont, on December 3, 1853. He received his early schooling at Craftsbury and then attended Military School at Norwich University in Northfield, Vermont and received his degree in 1877. He taught school in Vermont and studied law in his spare time. He was admitted to the Vermont Bar and in 1880 he moved to Fargo, Dakota Territory, and was admitted to practice law. Justice Spalding was very active in public life. He served as a member of the Capital Commission of the Dakota Territory; the North Dakota Constitutional Convention; and the 56th and 58th Congress in the years, 1899-1901 and 1903-1905. He was appointed to the Supreme Court January 31, 1907, at age 53, to replace Justice Engerud. He was elected in the 1908 election and served approximately seven years and eleven months until he was defeated in the 1914 general election. He returned to Fargo and engaged in the practice of law in addition to entering the banking field. He was the organizer and first President of Merchants National Bank of Fargo. Justice Spalding died on March 17, 1934, at age 80.