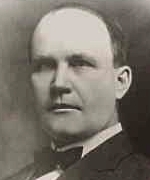 Justice Engerud was born in Racine, Wisconsin, on February 13, 1868. In 1881 he moved to Fergus Falls, Minnesota, where he took up the study of law for one year. In 1882 he went to Grand Forks, Dakota Territory, and studied law for one year, then returned to Fergus Falls to resume his studies in one of the Fergus Falls law offices. In 1889, at age 21, he was admitted to the Bar in Minnesota and practiced law in Fergus Falls for four years. In 1893 he moved to Lisbon, North Dakota, and was State's Attorney for Ransom County for two years. He moved to Fargo in 1895 and in 1897 was elected as Cass County State's Attorney, an office he held until 1900. He was then appointed Assistant United States District Attorney for a term of four years. He was appointed to the Supreme Court on August 9, 1904, to fill Justice Cochrane's term until the 1904 general election. Engerud was elected to fill out the remainder of Justice Cochrane's term in the 1904 election. He resigned from the Court on January 10, 1907, after serving approximately two years and five months. After his resignation, he returned to private practice in Fargo. He was appointed United States District Attorney in 1910 until 1914. Justice Engerud died on January 8, 1921, at age 52.