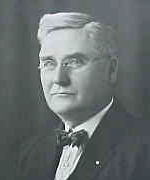 Justice Burke was born November 5, 1870, near Minneapolis, Minnesota. His parents moved to the Dakota Territory shortly after he was born. He received his early education in the North Dakota public schools. He attended the University of North Dakota for two years and then transferred to the University of Minnesota where he received his law degree. After being admitted to the North Dakota Bar, he started a practice in Valley City and served as Barnes County State's Attorney from 1901 to 1905. He was elected as Judge of the Fifth Judicial District and after serving one term he was reelected. However, in 1910 he resigned from that position when he defeated Justice Carmody in the general election for a position on the Supreme Court. Justice Burke assumed his position on the Bench at age 40 and served a six-year term before being defeated in 1916 in his attempt for reelection. He then practiced law in Bismarck until 1926 at which time he received an appointment as a Special Investigator for the Department of Justice. He served in that capacity until his death in Flossmoor, Illinois, on December 25, 1935, at age 65.