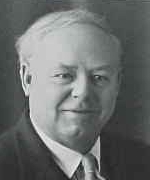 Justice Moellring was born in Quincy, Illinois, on November 14, 1878. He received his common education in the Quincy schools and studied law at Chaddock College of Law in Quincy. He completed his study at age 19; since he was too young to be admitted to the Bar, he taught school for one year and then enrolled in post graduate study of law at Highland Park College in Des Moines, Iowa. In 1901 he received a master of laws degree and was admitted to the Iowa Bar. He moved to North Dakota in 1902 and was admitted to the Bar. He practiced in Langdon from 1902 until 1905 and then moved his practice to Ray, North Dakota, in Williams County. Moellring authored a novel called "The Neutrals Portion" in 1916 under the pen name of Elwin Lorraine. In 1920 he was elected Judge of the District Court for the Fifth Judicial District and was reelected in 1924, 1928 and 1932. He resigned from the District Bench after 13 years of service to accept an appointment to the Supreme Court. On December 1, 1933, at age 55, he was appointed to the Court to fill the vacancy caused by the resignation of Justice Birdzell. He served one year and one month and was defeated in the election of 1934. He served as Assistant Attorney General for a short time after the 1934 election. Justice Moellring died on May 31, 1935, at age 56.