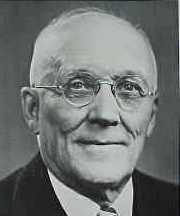 Justice Grimson was born in Iceland on November 20, 1878, and came with his family to the Dakota Territory in 1882 and located in Milton. He attended the Milton public schools and then taught there for a time before enrolling at the University of North Dakota in 1898. As he earned his own way through college, he attended the University intermittently until receiving his B.A. degree in 1904. He earned a master of arts degree in 1905 and was a Fellow of the University of Chicago in 1905 and 1906. He also received his law degree from the University of North Dakota in 1906. He received honorary doctor of laws degrees from the University of Iceland in 1950 and the University of North Dakota in 1939. He began his law practice in Munich, North Dakota, in 1906 and was the Editor-Publisher of the Munich Herald from 1908 to 1912. He served as State's Attorney for Cavalier County from 1910 to 1924. He became involved in the investigation of the death of a young North Dakota man in Florida and, thus, served as a Special Assistant Attorney General in the Florida Tabert-Whipping Box investigation and prosecution during the period between 1923 to 1925. He was elected judge of the Second Judicial District in 1926 and served until, at age 70, he was appointed to the Supreme Court on September 19, 1949, to succeed the retired Justice Burr. In the 1950 general election he chose to run for Justice Nuessle's position, rather than running for Justice Burr's remaining two-year term. He was elected to a ten-year term. He resigned on December 31, 1958, after serving on the Court for nine years and three months. Justice Grimson died on June 22, 1965, at age 86.