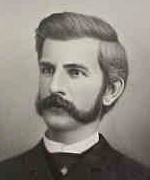 Chief Justice/Justice of the Supreme Court

Justice Corliss was born in Poughkeepsie, New York, on July 4, 1858. He received his elementary education in Poughkeepsie and graduated from Poughkeepsie High School in 1873 at age 15. He was then employed as a clerk in a store and, at the same time, studied law in the office of a Poughkeepsie attorney. He was admitted to the New York Bar in September of 1879 at age 21. He then practiced law in New York from 1879 to 1883. In 1883, he moved to Grand Forks, Dakota Territory, and practiced law until he was elected to the Supreme Court of North Dakota in 1889. He was 31 years old when elected as one of the first three justices to the Court, and he served approximately eight years, eight and one-half months. He resigned from the Court August 15, 1898, and returned to Grand Forks to practice law and, with the aid of President Webster Merrifield of the University of North Dakota, organized the School of Law. Justice Corliss became the first Dean of the School of Law and served in that capacity from 1899 until 1902. He then returned to the practice of law but remained as part-time Professor of Law until 1912 when he left the state. The Phi Alpha Delta National Legal Fraternity organized a chapter at the Law School and it was named the Guy C. H. Corliss Chapter. Justice Corliss received a Doctor of Laws degree from the University of North Dakota in 1930. On November 24, 1937, at age 79, Justice Corliss died in Portland, Oregon.