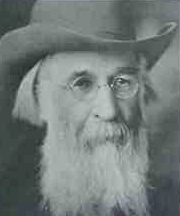 Justice Robinson was born in Michigan on May 11, 1843. He obtained his early education in Canada where he taught school for a short time. He enlisted in the Army and served during the Civil War. After being discharged, he started his formal education which culminated in his graduation from Michigan State University School of Law on March 5, 1868. He practiced law in Wisconsin until moving to Fargo, Dakota Territory, in 1883. While in Wisconsin, he served one term as District Attorney for Trempleau County. He practiced in Fargo until his election to the Supreme Court in 1916 at age 73. He served a six-year term but was defeated in a reelection attempt in 1922. During his term on the Bench he wrote a weekly letter for the newspapers concerning the work of the Supreme Court. He also authored a book in 1923 entitled "Wrongs and Remedies". After leaving the Bench he remained in Bismarck and practiced law until he was forced to retire due to health reasons. Justice Robinson entered a National Soldiers Home in Milwaukee in 1931 and remained there until his death on March 22, 1933, at age 89.