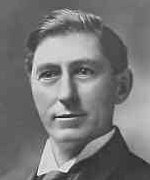 Justice Burke was born February 25, 1859, in Sigourney, Iowa. He was educated in Iowa and in 1886 obtained his law degree from Iowa State University. From 1886 to 1888 he practiced with his brother in Des Moines and by himself in Henning, Minnesota. He came to the Dakota Territory in August 1888, and worked for a time as a farm hand in Traill County. He then moved to St. John, Rolette County, where he taught school, edited the local paper, and practiced law. He moved to Rolla when it became the county seat, served as Rolette County Judge from 1889 to 1891, and practiced law until September 1902. A member of the State House of Representatives from 1893 to 1895, he unsuccessfully ran for State Attorney General in 1894, U.S. Congress in 1896, and District Judge in 1900. In 1902 he moved to Devils Lake and practiced law until he was elected Governor in 1906 and reelected in 1908 and 1910. After retiring as Governor, he was appointed Treasurer of the United States by President Wilson and served from 1913 until March 1921. He then joined a stockbroker firm in New York City and shortly thereafter his firm, and about forty others, went bankrupt. He returned to Fargo and practiced law with his son, Thomas, until, in 1924, he was elected to the Supreme Court at age 65 and reelected in 1930 and 1936. In 1936, he received an honorary doctor of laws degree from the University of North Dakota. Justice Burke died in office at age 78, on May 14, 1937, after serving on the Bench approximately 12 years, four and one-half months.