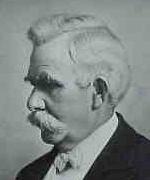 Justice Carmody was born January 6, 1854, in Granville, Milwaukee County, Wisconsin. He received his early education in the Wisconsin public schools. When he was 14 he moved with his parents to Waseca, Minnesota, where he received his high school education. He then taught school for several years and, subsequently, took up the study of law in an attorney's office in Waseca. Justice Carmody was admitted to the Bar in March 1880 after having pursued his studies for several years. He practiced law in Waseca until August 1885 at which time he moved to Hillsboro, Dakota Territory. While a resident of Hillsboro, he served one term as Mayor and 14 years as City Attorney. He also served one term as Traill County State's Attorney. Justice Carmody was appointed to the Supreme Court by Governor Burke on January 15, 1909, at age 55, pursuant to the constitutional change increasing the number of justices from three to five. He was defeated for the position in the 1910 election, and left the Bench after serving one year, eleven and one-half months. After leaving the Court, he served as an Assistant Attorney General for several years, as a member of the Board of Control for two years, and as Assistant United States Attorney for North Dakota. Justice Carmody died February 19, 1920, at age 66.