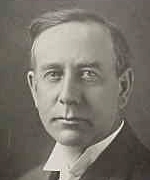 Justice Knauf was born in Waterloo, Michigan, on April 5, 1868. His parents died when he was very young and Justice Knauf and his brothers and sisters moved to Stutsman County in 1883. He received his high school education in the Jamestown school system. He spent one year at Jamestown College and one year at St. John's in Collegeville, Minnesota, and then enrolled at the University of Michigan School of Law. He received his law degree in 1892 and was admitted to practice in Michigan. He was admitted to the North Dakota Bar in 1893 and opened an office in Jamestown where, for a time, he served as County Judge for Stutsman County. In 1906, at age 38, he was appointed to the Supreme Court to fill the position left vacant by the resignation of Justice Young. He was defeated in the 1906 election, and after serving four and one-half months on the Court, returned to private practice in Jamestown. Justice Knauf died on September 19, 1952, at age 84.