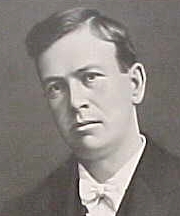 Justice Cochrane was born on March 11, 1859, in Mt. Pleasant, Westmoreland County, Pennsylvania. In 1861 he moved with his parents to Canton, Illinois, and in 1865 they continued their westward migration, taking up residence in Fairbault, Minnesota. In 1873 they moved to Minneapolis, Minnesota, and in 1876 he attended the State University of Minnesota. In 1879 he entered the law school of the University of Michigan at Ann Arbor. He graduated in 1881 and was admitted to the Bar in the state of Minnesota where he practiced law until March 1883. At that time, he moved to Grand Forks, Dakota Territory, and practiced law until the fall of 1884, when he was elected Probate Judge of Grand Forks County to a two-year term. He was reelected in 1886, but resigned in 1887 to accept an appointment as State's Attorney for Grand Forks County. He was elected to that office in 1888 to a two-year term. He was also a Criminal Law instructor with the College of Law at Grand Forks for a number of years. Justice Cochrane was elected to the Supreme Court in 1902 and after serving only one year and seven months, he died in office at age 45 on July 20, 1904.