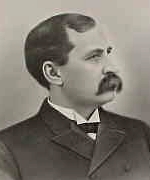 Chief Justice/Justice of the Supreme Court

Justice Bartholomew was born June 17, 1843, in Clarksville, Illinois. When he was two years old he moved with his parents to Lodi, Wisconsin, and was educated in the Lodi Public Schools. At age 18 he entered Wisconsin State University. His higher education was interrupted when he enlisted in the Army in August 1862 and served until November 1865. After the war he took up the study of law in the office of a Des Moines, Iowa, attorney. In 1869, he was admitted to practice at Dubuque, Iowa. After admittance he returned to Lodi, Wisconsin, for a short time and then returned to Iowa and practiced in Red Oak. Justice Bartholomew moved to LaMoure, Dakota Territory, in 1883 and practiced law until he was elected to the Supreme Court in 1889. He was one of the first three justices elected and received a five-year term. He assumed office for the first time at age 46, and was reelected in 1894. He retired at the end of his term on December 31, 1900, and returned to private practice after approximately 11 years and one month on the Bench. Justice Bartholomew died unexpectedly on March 24, 1901, at age 57.