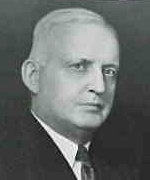 Justice Birdzell was born in St. Joseph, Illinois, on December 1, 1880. He received his elementary and secondary education in the Illinois school system. He received his law degree at the University of Illinois School of Law and practiced law in Chicago one year before coming to North Dakota. He taught at the University of North Dakota School of Law from 1904 until 1912. He left his teaching position to serve as North Dakota's first State Tax Commissioner from 1912 to 1914. He then returned to his teaching duties at the University until he defeated Justice Fisk for a position on the Supreme Court in the 1916 general election. Justice Birdzell assumed his position on the Court in January of 1917 at age 36 and was subsequently reelected in 1922 and 1928. After serving approximately 16 years and ten months on the Court, Justice Birdzell resigned on November 1, 1933, to assume the position of General Counsel for the Federal Deposit Insurance Corporation. During his career, he also served as Vice President and Senior Trust Officer of the Bank of America National Trust and Savings Association of San Francisco. Justice Birdzell died on February 23, 1973, at age 92.