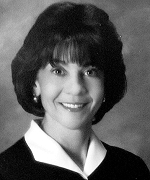 Mary Muehlen Maring was born and raised in Devils Lake, North Dakota. She received her B.A. degree in Political Science and German from Moorhead State University in 1972. Justice Maring graduated in 1975 from the University of North Dakota School of Law with a Juris Doctorate degree. After law school, she worked as a law clerk for the Honorable Bruce Stone, Hennepin County District Court, Minnesota. In 1976, she entered the private practice of law and spent 20 years practicing law in North Dakota and Minnesota state and federal courts. During her practice of law, she handled cases in many areas of civil litigation. She is certified as a Civil Trial Specialist by the Minnesota State Bar Association. She is a member of the International Society of Barristers. She has served in leadership positions in both the North Dakota and Minnesota Bar Associations, including president of the Clay County Minnesota Bar, president of the East Central Judicial District Bar Association, president of North Dakota Trial Lawyers Association, and a member of the Board of Governors of the State Bar Association of North Dakota. She has served on numerous committees to study and improve the system of justice. On March 1, 1996, she was appointed by Governor Edward Schafer to the North Dakota Supreme Court to fill the vacancy created by Justice Beryl Levine's retirement. On November 5, 1996, she was elected to complete that term, and in November 1998 and 2008, she was elected to ten-year terms as a justice on the North Dakota Supreme Court. She has served as chair of the North Dakota Judicial Conference, chair of the Gender Fairness Implementation Committee, and chair of the study implementation committee of the Juvenile Drug Courts in North Dakota. In addition to membership on numerous other committees, she currently chairs the Joint Procedure Committee, chairs the Judicial Education Commission, chairs the Juvenile Drug Court Advisory Committee, and is a member of the Juvenile Policy Board, the Commission to Study Racial and Ethnic Bias in the Courts, the Administrative Council, and the Alternatives to Incarceration Interim Legislative Committee. She retired as a Supreme Court Justice effective Dec. 31, 2013, after serving 17 years and 9 months. She nows serves as a surrogate judge. She and her husband, David, have two children.