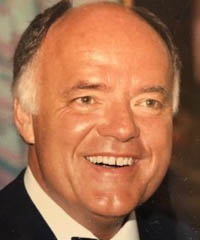 Thomas H. Carey, age 84, of rural Biwabik (Lake Eshquaguma) died Thursday, April 15, 2021, at St. Luke’s Hospital in Duluth, MN. He was born March 21, 1937, in Minneapolis, MN, to Howard and Vivian “Bim” Carey. He married the love of his life and high school sweetheart, Geraldine “Gerry” Helen Killian, on September 14, 1957. He was a well-known jurist, fierce litigator, outdoorsman, and family man who made a profound impact on many lives.

In 1955, Judge Carey graduated from De LaSalle High School in Minneapolis followed by a short tour in the Army. After release from the Army, he attained a Bachelor of Science Degree in Law from William Mitchell College of Law followed by a Juris Doctorate from the University of North Dakota School of Law in 1964. Between 1964 and 1986, he served as a well-known civil trial attorney for the Trenti, and Cope & Peterson Law Firms of Virginia, MN. After establishing his reputation as a tough, but fair-minded litigator, Tom was selected for and served as a State District Court Trial Judge for the State of MN from 1986 to 2000. Along the way, Judge Carey mentored many students as an Adjunct Professor at the William Mitchell College of Law, developed expertise in mass tort/complex litigation, and was appointed for a two year term as the Chairman of the State’s Charitable Gambling Control Board. In recent years, he continued to apply his expertise by serving as a Legal Representative for the API, Inc. Asbestos Settlement Trust.

Judge Carey may be remembered best for the twinkle in his eye, sharp wit, and love of playful banter. He was often found “holding court” at his lake place or duck camp on the Pelican River, offering his contrarian opinions and blarney to stimulate the conversation. He was a devout Catholic, proud of his Irish heritage, an avid reader, and cherished his time in duck blinds, fishing boats, or walking trails for grouse with his dog. Tennis and golf with associated side bets were staples for him during the summer, and he enjoyed taking the family skiing to various locations in the winter.

He is preceded in death by his parents, sisters Jacqueline (Jess) Lair and Joanna (Bob) McDonald, and twin brother John (Jan). He is survived by his wife and partner of 64 years, Gerry, along with their children Kelly (Jim) Frankenfeld, Jim (Molly) Carey, Pat (Susan) Carey, and Sean (Corinne) Carey, as well as 10 grandchildren and 5 great-grandchildren.

Due to COVID-19 concerns, a private ceremony for the family will occur in Minneapolis soon. In lieu of flowers or gifts, the family requests donations be made in his name to St. John’s Benedictine Volunteer Corps at www.sjbvc.org, or mail to The Benedictine Volunteer Corps, Saint John’s Abbey, 2900 Abbey Plaza, P.O. Box 2015, Collegeville, MN 56321.