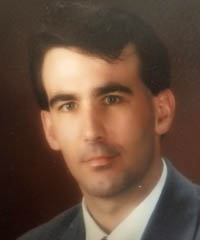 Daniel Harry Oster, 55, of Bismarck, North Dakota, passed away peacefully at the Mayo Hospital in Rochester, Minnesota on Monday, January 11, 2021. Dan was born on October 25, 1965, in Bismarck, ND, to Harry and JoAnn (Kinken) Oster. Dan was the youngest of five (5) children. He attended Bismarck schools, Richholt Elementary, Simle Junior High, and Bismarck High School. He went on to Bismarck State College and then to the University of North Dakota, where he graduated with a Bachelors Degree in Political Science and Business Administration in 1988. He obtained his law degree in 1991. He played many sports during his school years, such as Golden Glove Boxing, football, basketball and was an avid hunter and fishermen. He loved to fish the Governors Cup Fishing tournament with his father. He also loved to golf. He went to work as a law associate of Max D. Rosenberg from 1991 – 1994. He married Brenda Neubauer on July 24, 1999, and became a loving step father to Jake and Sam Neubauer and a grandfather to Nova Ogden, who was born December 28, 2015. He was very active in coaching basketball and football teams and would be the first person to volunteer to help with any youth sports. In 2000, Dan and Brenda opened the Law Firm of Neubauer and Oster. Then in 2012, he founded the law firm of Kellington and Oster. He was an accomplished litigator in state and appellate courts and was deeply devoted to his clients and his practice. He is survived by his father, Harry Oster, and siblings, Diana (Kevin) Schneider, Susan Schoener (Donald Newman), Joan Neubauer (David Sime) and Sandra (Mike) Kummer, His step sons, Jacob Neubauer and Samuel Neubauer (Madison Markovic). And his granddaughter Nova Ogden, And many nieces, nephews, cousins, aunts and uncles. He was preceeded in death by his mother, JoAnn Oster, infant brother, nephew, Thomas Kummer and niece, Susan Kummer. The family would like to thank the Mayo Hospital for the care Dan received. A service will be held at Faith Lutheran Church on Thursday, January 21, at 10:00 am. However, due to Covid, attendance is limited to 50 people. Internment will follow the service and held at Fairview Cemetery at 2929 E. Century Ave, Bismarck, ND. Memories can be shared on Dan's face book page. Flowers and cards can be sent to Faith Lutheran Church at 1402 E. Ave C, Bismarck, ND 58501.