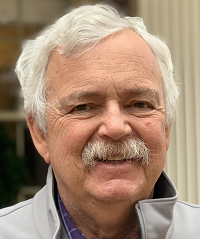 Dennis Edward Johnson of Watford City, North Dakota, passed from this life on Thanksgiving Day, November 25, 2021. He was 65 years old and rounding out the 27th year of a 1995 prognosis that he had no more than two weeks to live. Dennis taught everyone who met him something about life, especially that every day is a blessing and that you should never take yourself too seriously. To know him was to love him.

Dennis was born on April 4, 1956, to Norman and Maryann (George) Johnson. He grew up helping on the family farm and ranch and listening to every family story that was told. In high school, he played football for the Watford City Wolves and still holds the record for touchdowns in one game. Dennis played guitar and sang in a rock band called Cherry Creek, touring with his friends to play at dances far and wide.

While in law school, Dennis met Kathleen Lillian Kotalik. From their first date on October 28, 1978, until he breathed his last, he was madly in love with Kathleen. They were married on July 28, 1979, and, after Dennis finished law school, the couple moved together to western North Dakota to start their life. Dennis and Kathleen proudly raised their son Ariston (b. 1982) and daughter Martine (b. 1983), built a house on Dennis’s grandparents’ homestead, and worked together to live the best life they could.

Dennis founded the Johnson Law Office (now Johnson & Sundeen) in 1980 and worked there until his final illness 41 years later. While his professional accomplishments were many, two of them moved Dennis the most and best summarize who he was as a lawyer. At a special ceremony on the MHA Nation in 2005, Dennis was given the name “MaDa Gah Dee Ma Gah,” or War Buffalo: “an appropriate name for someone who defends, who goes to battle to fight for human rights.” The North Dakota Association for Justice awarded Dennis the prestigious Light of Justice award in 2016 to recognize a life dedicated to upholding the rights of the downtrodden. He also proudly served as the McKenzie County State’s Attorney from 1982 until 2013. He loved his work and in 1992 met Ross Sundeen, a young lawyer who loved work as much as he did. Ross joined the firm that year and later became Dennis’s business partner in the law firm as well as other ventures. They were the best of friends for the nearly thirty years they knew each other, often talking for hours to solve the mysteries of the universe. The day Dennis entered the hospital for the last time, he had begun the day with Kathleen, preparing their yard for winter, and then went with Ross to the River Ghost Ranch, one of their partnership ventures and favorite place to spend time together away from the office.

When Dennis lost his father to cancer in early 1995, he also became physically ill. In time, it was discovered that he had a combination of rare disorders that brought him suddenly to death’s door. One night, the doctors called Dennis’s family and told them that he had from two hours to two weeks to live. Dennis was offered a surgical option but, when he asked his doctors how many people had survived that surgery, they looked at each other fearfully before telling him that nobody ever had. Faced with even the remotest chance that he could spend another few months with his beloved wife and children, Dennis made the difficult choice to undergo surgery.

Dennis’s recovery was nothing short of miraculous. He built strength by pushing his IV pumps around the hospital corridors, came home to the care of Nurse Kathleen, and eventually was able to eat normally and end his dependence on intravenous nutrition. Freed from such hassles, he continued working harder than any man should and adventuring with his family, friends, and colleagues. Dennis was blessed with many more days than anyone had predicted, and he made the most of each one of those days.

In 2006, Dennis proudly gave away his daughter Martine in marriage to Daniel Kline. In 2007, he celebrated his son Ari’s graduation from William & Mary Law School. Ari’s successes as an attorney and in other pursuits and Martine’s graduation from University of Minnesota Law School and her hard work as a full-time mom were particular sources of joy for Dennis. The last ten years were probably his best. In September 2011, Ari moved back to Watford City to join the law firm after beginning his career in Bismarck. In October 2011, Martine and Dan welcomed their son Aedric to the world. From then on, Dennis’s life kept getting better. Granddaughters Cressida and Pippa followed in 2014 and 2017. Dennis never tired of telling stories to his grandchildren, just as he had never tired of listening to stories in his youth. His ability to tell a story led to a true crime book he authored, The End of the Rope, being made into a feature film in 2021. Dennis’s role in producing the film gave him a unique opportunity to choose extras, including his grandchildren.

Dennis’s pursuits were too many to list. Grateful for his miraculous second lease on life, he tried it all from archery to dogsledding and from archaeology to aviation. The lives he touched are beyond number. He was a best friend to many, a blood brother or surrogate uncle to a few, and a mentor to all who met him. He despised bullies and made every decision, whether the recommended sentence for a crime or the choice of activities for his grandchildren, from a place of deep compassion. Dennis was fearless. His faith in Christ’s salvation was unshakable, no matter how bleak things looked.

Dennis loved life and loved the people in his life. He was preceded to Heaven by his father Norman Johnson, his grandparents Edward and Bertha Johnson and Dennis and Anna George, numerous friends and extended family members whom he missed until the end of his days, and several special dogs and horses. He is survived by his mother Maryann Johnson, his siblings Karen (Ron) Broderson, Curtis Johnson, and Ann-Marie Irizarry, his children Ariston Johnson and Martine (Daniel) Kline, his grandchildren Aedric Kline, Cressida Kline, and Philippa Kline, numerous friends and extended family members whom he loved until the end of his days, and, last and most importantly, his soul mate Kathleen Johnson, whose face made him smile and say “look at that pretty girl” even on his last day on Earth and without whom at his side he refused to fall asleep even for a moment in his final hours, lest he should miss a chance to say he loved her.

Dennis’s remains have been cremated. A celebration of his life will be scheduled in the spring. Dennis’s family asks that you honor his legacy by donating blood, contributing to Farm Rescue, and loving your neighbor as you love yourself.