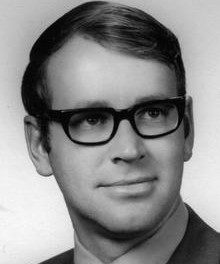 He was born on May 16, 1943 and grew up in Cavalier, North Dakota, where he married his high school sweetheart Vivian Ella Spenst.

He earned degrees in Civil Engineering and Law from the University of North Dakota in Grand Forks, ND. Dwight and Vivian had two daughters, Julie Berniece and Amber Becky, and raised their family in West Fargo, where he was an attorney and at one time a municipal court judge.

He enjoyed a cold beer, a good smoke, fishing and deer hunting.

Before two decades of marriage, he and Vi divorced, but neither of them ever remarried. When dementia took him back to the past, he referred to her as “the love of his life” and he asked about her every day.

He was always proud of his five grandkids, Logan Nicholas, Austin Nathaniel, Sophie Jayne, April Mae, and Andrew Christian. He is survived by his two daughters Julie (Mike) Leo, Amber (Randy) Stinson, and his grandkids, but preceded in death by his parents and most of his siblings.