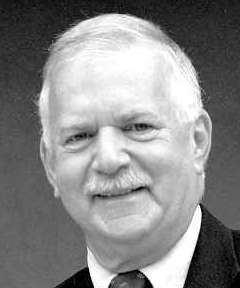 Bud Myers, age 82, of Fargo, ND, passed away on Sunday, October 18, 2020, at Rosewood on Broadway under the care of Hospice of the Red River Valley.

Bud was born in New Milford, CT, to Earle and Bess Myers. He grew up there and after high school attended college at The Citadel in Charleston, SC. Bud served in the United States Air Force from 1961 to 1965, earning the rank of 1st Lieutenant. During his time in the service he was stationed at Malmstrom Air Force base in Great Falls, MT and Clark Air Force base in the Philippines.

In 1963, Bud married Susan Haas of New Rockford, ND. He graduated from UND Law School in 1969 and was a career prosecutor serving the citizens of North Dakota in Grand Forks, Richland and Cass counties for over 30 years. Bud served as Richland County State’s Attorney from 1977-2003 where he played an active role in the North Dakota State’s Attorney’s Association and the National District Attorney’s Association.

Bud had a passion for people, a great sense of humor and simply loved to chat. He enjoyed many thrilling adventures with his daughter including climbing Mt. Kilimanjaro, attempting Mt. Everest and zip-lining in Alaska – all after age 70. He spent years at hockey rinks watching his son and three grandchildren play hockey and could often be seen in local courtrooms watching his son in trial. Bud was a mentor to his son in both arenas. In retirement, he spent many years with the beloved team at Valley Water Rescue and his search dogs Barnaby and Laura.

In lieu of gifts or flowers, contributions can be made in his name to Valley Water Rescue, 3719 21st Street South, Fargo, ND 58104.

A private family interment will be held at a later date at the Fargo National Cemetery. Arrangements entrusted to the care of Boulger Funeral Home and Celebration of Life Center in Fargo.