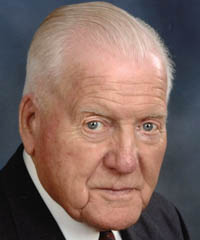 Henry G. Tweten, age 97 of East Grand Forks, MN, passed away on Sunday, January 31, 2021 from complications of Covid-19.
Henry was born on December 21, 1923 the son of Gunder and Hilma (Johansson) Tweten in East Grand Forks, MN. He grew up in East Grand Forks and graduated from high school in 1941. Henry was drafted into the United States Army and served from 1943 to 1945. He was part of General Patton’s Third Army and returned from WWII as a Second Lieutenant, decorated with the Purple Heart and the Silver Star. He then attended the University of North Dakota, earning his law degree in 1951. Henry married Ramona Pederson on November 22, 1949. He practiced law in East Grand Forks for over 60 years and served twenty-four years on the East Grand Forks City Council. Henry was a lifelong member of Our Saviors Lutheran Church. Always an advocate for education, Henry was instrumental in the establishment of Northland Community and Technical College and the creation of the Henry Tweten Military History Library of East Grand Forks. He was awarded the Henry Having Award in 2014 for his lifelong contributions to the community. One of his biggest joys was being with his family at the cabin he built on Grace Lake.
Family members who survive Henry include his children, Jeff Tweten of St. Paul, MN, Lynda Tweten of Roseville, MN, Debra Tweten of Plymouth, MN and Tim (Coleen) Tweten of East Grand Forks, MN; 3 grandchildren, Ali (Justin) Swang, Maggie (Riley) Gregoire, and Tanner Tweten; 3 great-grandchildren, Ellery, Corban and Gus Swang along with several nieces, nephews and cousins. He was preceded in death by his wife Ramona in 2003, his parents, 5 sisters, and 2 brothers.
Memorials are preferred to Our Savior’s Lutheran Church Children’s Bible Fund or the Henry Tweten College Scholarship Fund which will be set up at Frandsen Bank of East Grand Forks.
A celebration of life for Henry will be held at a later date.
Interment: Resurrection Cemetery ~ East Grand Forks, MN with Military Honors provided by the EGF VFW Post #3817, American Legion Post #157 and the MN National Guard.