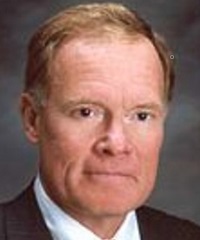 Visitation will take place immediately before the service at 9:00 am.

He will be buried at St. Mary’s Cemetery, Bismarck.

A service livestream will be available at the funeral home website (see link below).

Lawrence A. Dopson was born March 16, 1949, in Columbia, Missouri, the second of four children of Fred and Helen (Johnson) Dopson. He spent his early years in Kansas and Missouri, and moved with his family to Jamestown, in 1963, where he graduated from Jamestown High School.

He graduated from Jamestown College in 1971 and spent a summer at Harvard before entering law school at Northwestern University in Chicago, where he earned his juris doctor degree in 1975. He then returned to North Dakota and began his law career as a law clerk for the North Dakota Supreme Court. As a law clerk, he saved his money to fulfill his dream of traveling from Canada to South America. He made it as far as Banff before having a change of heart and returning to Bismarck to propose to the young lawyer and fellow clerk whose desk at the Supreme Court just happened to be next to his—Christine  Hogan. Larry and Christine were married in 1976 and made their home in Bismarck, where their two sons, Jesse and Christopher, were born.

Above all else, Larry was a family man. His boys were the light of his life and he enjoyed nothing more than finding ways to surprise and delight them. He took Christopher to New York when he was nine years old to see The Secret Garden on Broadway just because it was Christopher’s favorite book. Larry was a bit of a sports fanatic and he loved taking the family to major league baseball, basketball, and football games. He never missed the boys’ sports events, especially Jesse’s football games at St. Mary’s High School and Jamestown College. The last three years of Larry’s life were blessed by the arrival of two beautiful grandchildren, Josephine, age 3, and Donovan, 10 months. Larry experienced endless joy spending time with his grandchildren.

Larry never lost his desire to see the world and he instilled in his sons his sense of fun and adventure as well as his love of travel. There was no trail Larry did not want to hike, no butte or mountain he did not want to climb, and no ocean into which he did not want to dive headfirst. Family vacations were what Larry lived for, taking Christine and the boys to the national parks, the coasts, and all interesting points in between. The family shared a special love of the Badlands and they were active in the Badlands Conservation Alliance. One of Christine’s most joyous memories is of a raucous family reunion in Hawaii, when Jesse was teaching in South Korea and Christopher was in college in Los Angeles. Larry and Christine loved to scuba dive, and they enjoyed numerous diving vacations in the Caribbean. The couple looked forward to traveling the world together after Christine retired this October; but by then, Larry was already fighting for his life in the hospital.

Though sometimes a man of few words, Larry was known as a deep thinker.  He was a prodigious reader, particularly of biographies and histories.  He was known by all for his quick wit and biting sense of irony, which kept everyone in stitches.

Larry was one of Bismarck’s most well-liked and well-respected attorneys, and he established lasting friendships with many lawyers and judges across the state. He had a long career practicing law that touched many lives in the community. He started his practice with Joe Vogel in Mandan, continuing with partnerships in the Pearce and Durick firm and in the Zuger, Kirmis, and Smith firm; he ended his career as a partner in the Vogel Law Firm in Bismarck, from which he retired earlier this year. Even after retirement, Larry continued to mentor the young lawyers in the firm.

One of the highlights of Larry’s life was his 40-year membership in the notorious “Canoe Gang,” canoeing down the Little Missouri and Upper Missouri Rivers and sharing deep friendships with Bill Knudson, Mike Jacobs, Ken Rogers, Jim Fuglie, Jeff Weispfenning, Mike Burbach, Gerry Reichert, Tim Wild, and Mike Kane, and Bob Dykshoorn and Larry Remele, the last two of whom floated down the big river ahead of him. The crew gave deep meaning to the term “male bonding.”

Larry was born with a hereditary kidney disease, and he spent years undergoing dialysis before receiving a life-changing kidney transplant last December at the Mayo Clinic. He was able to receive a live kidney because his wife donated a kidney on the same day Larry received the gift of his new kidney. That transplant gave Larry a new lease on life for ten wonderful months of good health but left him with no immunity to the covid virus, which he contracted despite being fully vaccinated.

Larry spent his last weeks under the care of the good doctors and nurses at Sanford, with his wife and son at his side along with many devoted family members and friends, especially his brother, Dr. Warren Dopson.

He was preceded in death by his beloved son, Jesse; his parents, Dr. Fred and Helen Dopson; his brother-in-law, Dr. Richard Arazi; and his mother-in-law and father-in-law, Anne and Maj. Gen. Henry Leon Hogan III.

Memorials can be made to the Badlands Conservation Alliance.