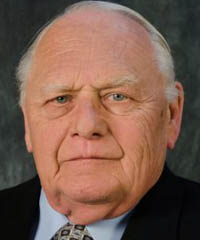 Robert Lee (Bob) Stroup Junior, 79, lost his struggle with heart disease and chronic obstructive pulmonary disease (COPD), and passed away on January 6, 2021, peacefully at his home in Fargo, North Dakota, under the loving care of his family.

Bob Stroup was born to Lillian Rosine (Pridt) and Robert L. Stroup on May 30, 1941, in Hazen, North Dakota, the second in a family of six children and the eldest son. He grew up in Hazen and graduated from Hazen High School in 1959. While in high school, Bob lettered for the Hazen “Bison” in football, basketball and track, ironically garnering an invitation from University of North Dakota Head Coach Marv “Whitey” Helling to tryout for the football team in the Fall of 1959. While growing up in Hazen, Bob was also actively involved in the Boy Scouts of America, where he was a member of Troop 43 and certified as an Eagle Scout on August 28, 1956, and in August 1957 was inducted into Order of the Arrow in the Chan-Owapi Lodge.

Bob enrolled at North Dakota State University (NDSU) for the 1959-60 academic year but then returned to Hazen to work for the family business, the Hazen Lumber Company, until the Autumn of 1962, when he enrolled at the University of North Dakota (UND) in Grand Forks, North Dakota. While at UND, Bob earned both his Bachelor of Arts degree and Juris Doctorate degree in five years, graduating from the School of Law in 1967, where he was Recent Case Editor on the North Dakota Law Review and recognized as a member of the Order of the Coif honor society.

On October 11, 1960, in spite of tremendous obstacles, our “Romeo” married his “Juliet,” Colletta Jean Albers, his high school sweetheart and the love of his life. They remained married until Colletta passed on November 15, 2017, under Bob’s care in their home in North Fargo. Bob and Colletta were married for 57 years, living in Hazen, North Dakota, from 1960 to 1962, and Grand Forks, from 1962 to 1967, eventually making Fargo, North Dakota, their home since 1967, and raising four children there. Get ready, Colletta, Bob will be looking for his Coke and for you to tickle his back.

That Bob was learned in the law in his chosen field of expertise, real estate, is beyond dispute. “I have spent my entire professional life as an attorney focused on the practice of real estate law. I find it fascinating and interesting. When I read an abstract, I see it as a small bit of history. Clients I have worked for over the years will tell you that I am a stickler for detail, and it is true. This is important for an attorney who focuses on real estate law.” In 1967, Bob began his professional career practicing law at Nilles, Oehlert, Hansen, Selbo & Magill, a law firm in Fargo, North Dakota, where he remained for 39 years until leaving the Nilles Law Firm in 2006 to take his talents to a boutique real estate firm for the final ten years of his career, retiring in September 2016. In 1987, along with John Shaft, Bob Wefald, Bob Johnson, Harry Barnes and Dave Wanner, Bob reinvigorated the Title Standards Committee/Mineral Title Standards Committee, a part of the State Bar Association of North Dakota (SBAND) Section of Real Property, Probate and Trust (RPPT), after it had become dormant for nearly 20 years. A member since the 1970s, Bob was elected Secretary/Treasurer of the SBAND RPPT Section in 1987, and Chairman of the Title Standards Committee in 1999, serving in both posts until his retirement in 2016. He was the first North Dakota lawyer to become a member of the American College of Real Estate Lawyers (ACREL), the most distinguished national honor a real estate lawyer can receive. ACREL consists of approximately 900 of the most prominent real estate lawyers in the United States and Bob was the sole member from North Dakota for several years and remained a member until his retirement. Bob was also recognized on numerous occasions as “Fargo Real Estate Lawyer of the Year” by Best Lawyers, America’s oldest and most respected peer review publication in the legal profession, most recently in 2012. He was a frequent speaker and presenter at the RPPT Section annual seminar and authored numerous articles and presentations on real estate law, including a handbook on North Dakota real estate foreclosure that for many years was the essential guide that all practitioners had on their desks. Bob authored many pieces of legislation related to real estate that were introduced and passed by the North Dakota legislature, including redrafting the North Dakota foreclosure laws. Bob was widely considered the “dean” of North Dakota real estate lawyers during his career.

To many, Bob could be ornery and obtuse, and he was renowned for his difficult disposition, incurring nicknames like the billy goat’s gruff, grouchy, and the ironic “Smiley,” but to those who knew him, his bark was much worse than his bite, and if he was a curmudgeon, his family likes to think of him as “our curmudgeon.” Bob loved to read and the Stroup house was filed with a sizeable library where the only restriction on borrowing was that you put the book back once it was finished. He also loved to listen to music and the sounds of doo-wop from the 50s and 60s, Elvis Presley, Neil Diamond, show tunes and many others filled the house on evenings and over weekends. Bob loved sports and following his children’s and grandchildren’s athletic careers closely and proudly, but he especially loved the NDSU Bison and Bison football. Many was the Saturday when the kids were warned to be quiet and the house was filled with the thunderous shout, “TOUCHDOWN BISON!” whenever the Herd scored. What a relief when he finally became a Bison Teammaker and season ticket holder, which he remained for over 35 years, a time span that including watching two of his sons win four National Championships playing football for the Bison. “The strength of the Herd is the Bison, the strength of the Bison, the Herd!” Bob was also an avid and enthusiastic golfer for most of his life, and he enjoyed his membership at Oxbow Country Club, serving on its board of directors for many years. He also gave time serving on the board of the Vocational Training Center for over 20 years, and in his last years, Bob volunteered his time at the Emergency Food Pantry of Fargo.

Bob is survived by his son and daughter-in-law, Robert L. Stroup III and Suzanne T., and grandchildren Laura Dunbar (Mike), Robert L. IV, Amy and Emily; daughter and son-in-law Carmen M. and Mark A. Lipparelli, and granddaughter Grace; son Bradley J. Stroup and granddaughters Anna and Molly, and son and daughter-in-law Christopher M. and Jill A. Stroup, and granddaughters Abby and Jordy, as well as three great-grandsons, including a Robert L. Stroup V. He is also survived by sisters Robyn Vinje and Elizabeth Stroup-Menge; brothers Jim, Larry and Tom, along with many loving cousins, nephews, nieces and other family and friends. He was preceded in death by his beloved wife Colletta, his parents Robert L. and Lillian, and grandson Ryan Lee Lipparelli.

The family expresses its sincere gratitude to the entire staff and caregivers from Hospice of the Red River Valley. Your concern, support and tender care made all the difference to our entire family in the last several days of his life.

Because of the current pandemic, no memorial or funeral service is planned, but the family will celebrate Bob’s life sometime in the very near future.

Arrangements through Boulger Funeral Home in Fargo, ND. In lieu of flowers, memorials can be sent to the Emergency Food Pantry of Fargo or Hospice of the Red River Valley.