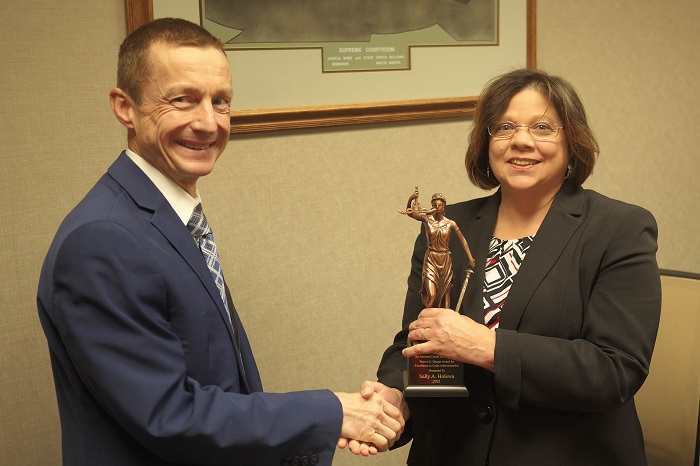 Holewa, the state’s top court administrator since 2005, was honored with the award Sept. 28 during a virtual presentation from NCSC President Mary C. McQueen before a gathering of the Supreme Court's justices and court administrative staff. Chief Justice Jon Jensen personally presented the award to Holewa on behalf of McQueen.

The honor is awarded to individuals who make significant contri­butions to the field of court administration through management and administration, education and training, or research and consulting.

“Sally truly embodies the professional expertise, leadership, integrity, creativity, innovativeness and sound judgment that this award represents,” McQueen said. “Her work ethic and commitment to fair and equal justice is felt by citizens in North Dakota and beyond.”

Holewa’s contributions have impacted courts in several states including Michigan and Minnesota. She is a graduate of NCSC’s Institute of Court Management Fellows program and a member of the Conference of State Court Administrators, National Association of Court Management and American Society for Public Administration.

The Warren E. Burger Award for Excellence in Court Administration is named for the late chief justice of the United States, who was instrumental in founding NCSC and its Institute for Court Management.