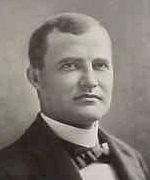 Justice Young was born January 28, 1862, in Mount Pleasant, Iowa. He received his elementary education in Taber, Iowa; graduated from the Iowa City Academy in 1882; received a bachelor of arts degree at Iowa State University in 1886; and obtained his law degree from the same institution in 1887. He moved to Bathgate, Dakota Territory, in 1887 and practiced law until 1898. During this period of time, he served two terms as County Attorney for Pembina County. As a result of Justice Corliss' resignation, Young was appointed to the Court in 1898 by Governor Devine to serve until the 1898 general election. He was elected to a term in 1898 and was reelected in 1904. He assumed office at age 36 and served approximately seven years, ten and one-half months. He resigned from the Court in 1906 and practiced law in Fargo until his death at age 61 on November 10, 1923.