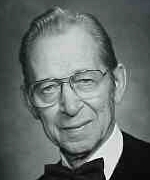 Justice Sand was born in Balta, North Dakota, on October 21, 1914. He attended the University of North Dakota and graduated from the law school in 1941 with an LL.B., which was later converted into a juris doctor degree. He was admitted to the North Dakota Bar in 1941 shortly after graduation. He was inducted into the Army in the fall of 1941 as a private. One year later, he graduated from OCS as a Second Lieutenant and was assigned to division headquarters; subsequently, he was assigned to a corps headquarters. He served in the European Theatre while in the military service. He performed duties in various positions of the military justice system, such as trial judge advocate, defense counsel, member of general court, law member of general court, and president of special court. He was also assistant staff judge advocate of the United States Berlin District. He attended the London Law School Society while he was in the service. Shortly after the cessation of hostilities in the European Theatre, he began serving with the War Crimes Commission by commanding U.S. investigation teams attached to the British Army of the Rhine. In the spring of 1947, he was separated from the military service as a lieutenant colonel. After a brief interlude of recreation, he began a private practice in Rugby. He served as Assistant Attorney General from 1949 to 1963, when he was appointed First Assistant Attorney General. He was elected to the Supreme Court in 1974. Justice Sand died in office on December 8, 1984, at age 70, after serving nine years and 11 months on the Bench.