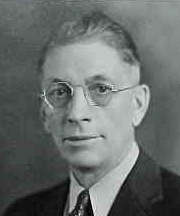 Justice Sathre was born on February 7, 1876, in Adams, Minnesota. He moved to Steele County, Dakota Territory, with his parents in 1884. His early education was in the public schools of Steele and Griggs Counties, and in 1910 he received his law degree from the University of North Dakota. He practiced at Finley, North Dakota, and served as Steele County State's Attorney for 13 years. He was also a one term member of the State House of Representatives and a three term member of the State Senate. He was appointed Assistant United States Attorney in 1932 but resigned in April of 1933 to accept an appointment as First Assistant Attorney General for North Dakota. He then became Attorney General upon the resignation of A. J. Gronna and was elected as Attorney General in 1934 and reelected in 1936. He resigned on December 1, 1937, to accept an appointment to the Supreme Court when a vacancy occurred due to the death of Justice Burke. Justice Sathre assumed office at age 61. He was defeated in 1938 and left the Court December 31, 1938, after serving one year and one month. He then served as an Assistant Attorney General under Attorneys General Strutz, Nels Johnson and Wallace Warner. He then became one of two Supreme Court Justices to serve on the Court at two different intervals when, at age 74, he was elected in 1950 to fill the unexpired term of Justice Burr. He was reelected in 1952 and retired in 1962 after 12 continuous years on the Bench. He served a total of 13 years and one month on the Court. Justice Sathre died on January 23, 1968, at age 91.