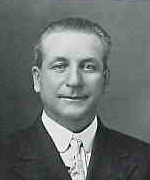 Justice Grace was born near Palmyra, Illinois, on November 8, 1868. He received his early education in country schools, however, when he was about 15 years of age his education was interrupted for several years when his father died. He then prepared himself with the preliminary requirements which allowed his admission to Bushnell College near Peoria, Illinois, which he attended for three years. In 1889, he then undertook the study of law in an office in Springfield, Illinois. He combined his law studies with teaching until 1893 when he moved to Morris, Minnesota, where he taught and continued his study in a Morris law office. He was admitted to the Minnesota Bar in 1895 and practiced in Morris for ten years. In 1905, he moved to Mohall, North Dakota, where he practiced until he defeated Justice Goss for election to the Supreme Court in 1916. Justice Grace was 48 years old when he assumed office. He retired from the Bench after six years and then opened an office in Bismarck where he practiced for two years. He then went to Sioux City, Iowa, for about a year. He returned to Minot and practiced for three years before returning to Mohall where he remained until his death at age 60 on February 9, 1929.