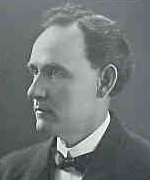 Justice Ellsworth was born September 29, 1862, near Pittsburgh, Pennsylvania, and moved with his parents to Kansas in 1871 and Illinois in 1875. He taught school for a time and then entered law school. He graduated from Valparaiso Law School in 1891 and was admitted to practice. He moved to North Dakota in 1893 and was admitted to practice in North Dakota that same year. He practiced law in Carrington until December 1894. He then moved to Jamestown and continued his practice for about 50 years. The only break during his years of practice was in January 1909, when he was appointed to the Supreme Court by Governor Burke at age 46. His appointment was made pursuant to the constitutional change increasing the number of justices from three to five. Justice Ellsworth was defeated in the 1910 election and returned to his private practice in Jamestown after serving on the Supreme Court one year, eleven and one-half months. From 1936 to 1938 he served as an attorney for the Highway Department. Justice Ellsworth died October 31, 1945, at age 83.