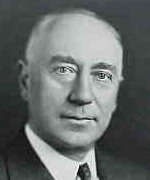 Justice Johnson was born in Iceland on July 10, 1883, and came to Dakota Territory with his parents in 1887. After receiving his early education in this state's public schools, he attended the University of North Dakota where he received a bachelor of arts degree in 1906, a master of arts degree in 1907 and a law degree in 1908. He then undertook some special studies at the University of Wisconsin. In 1911 he opened a law office in Cavalier and in 1913 moved to Grand Forks. In addition to his practice, he lectured in Political Science and Law at the University of North Dakota. Johnson was elected Attorney General in the 1921 election which was brought about by the recall of William Lemke. In 1922 he defeated Justice Robinson for a position on the Supreme Court and assumed office at age 39. After serving the Court for three years and eleven months, he resigned December 1, 1926, to become legal counsel and Professor of Law at the University of Illinois. He continued in those capacities until resigning on September 1, 1944. He was defeated in the 1944 election for the position of Illinois Attorney General. On January 1, 1945, he opened a law office in Chicago and remained in practice until his death at age 62 on March 16, 1946. In addition to his other accomplishments, Justice Johnson authored several books on law and history and received honorary Doctor of Laws degrees from the University of Iceland in 1930 and the University of North Dakota in 1937.