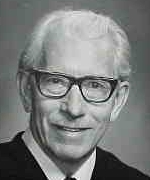 Justice Pederson was born September 11, 1919, on a farm in Ward County near Deering, North Dakota. He attended Minot State Teacher's College for two years. After World War II, he received B.S.C., LL.B., and J.D. degrees at the University of North Dakota. In 1949, he began to practice law in Minot and served as Minot City Justice for a time. For two years, 1951-52, he served in Fargo as an Office of Price Stabilization Special Agent-Attorney. On June 15, 1953, he was named a Special Assistant Attorney General for the State Highway Department and the State Game and Fish Department of North Dakota. From 1966 to 1972 he served on the original State Employee Retirement Board (PERS). He was the chairman of the first State Deferred Compensation Committee from 1972 to 1975. In 1974 he was elected to the Supreme Court and reelected in 1980. In 1975 he served the Supreme Court as chairman of the Management Information System, which designed the original computerization of court records in North Dakota. He was also chairman of the Supreme Court Personnel Advisory Board from 1982 to 1984. He represented the judiciary as a director of the North Dakota Community Foundation from 1976 to 1983. Justice Pederson was the first chairman of the Judicial Planning Committee, which was organized in 1976. Justice Pederson retired on January 7, 1985, after ten continuous years on the Bench. He served as a Surrogate Judge of the Supreme Court, 1985-1999. His wife Evelyn died in 2007. He resides in Fargo. They have two children.