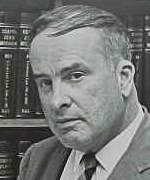 Justice Murray was born in Bismarck, North Dakota, on December 26, 1916, and received his early education in the Mott public schools. He attended the University of North Dakota and received his B.A. degree in 1937 and his law degree in 1939. After admission to the Bar he practiced law in Bismarck. Justice Murray served in World War II from April 1, 1941, to February 6, 1946, and in the Korean War from November 1, 1950, to March 5, 1953. During 1947 he briefly worked for the Central Intelligence Agency in Washington, D.C. In 1951 he graduated from the Army Language School located in Monterey, California. He was a member of the North Dakota House of Representatives in 1949 and 1950. He served as Assistant Attorney General in 1953 and as a Special Assistant Attorney General from 1957 to 1964. On April 1, 1966, at age 49, he was appointed to the Supreme Court to succeed Justice Burke who had died in office. He was defeated in his attempt to be elected to Justice Burke's unexpired term and left the Court after serving a period of nine months. After leaving the court, Justice Murray served as General Counsel for the Montana-Dakota Utilities Corporation from 1967 to 1976. He is the author of the novel, "Song of the Dusty Stars," published in 1985. Justice Murray died on November 30, 1998, at age 81.