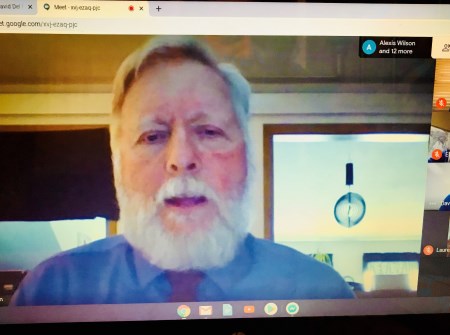 School closures and stay-at-home orders related to COVID-19 have not stopped North Dakota judges from making connections with students throughout the state.

David Del Padre, a teacher at Hope Christian Academy in Dickinson, had planned for a judge to speak to his class in April as part of the court’s Courtrooms2Classrooms program, but those plans had to change when schools closed. Not to be deterred, he asked if the judge would agree to be a guest in his virtual classroom.

On May 5, Judge Jim Gion from the Southwest Judicial District, joined Del Padre’s middle school North Dakota History class on Google Meet to talk about the North Dakota Court system and jury service. The day before, students were told that this would be formal meeting with a guest speaker.  They were instructed to do three things: wear their school uniform shirt, sit at a table or desk for the meeting, and think of two questions they have about courts or jury service.

Del Padre said he wanted an atmosphere of respect and seriousness as the students approached this event.  His students are entering the last instructional unit for this year, which is North Dakota government.  He said the fact that all but one student showed up with no tech issues and with very well throughout questions showed in a middle school way that they were interested and invested.  He added that the one absent student went to great lengths, despite being hospitalized that morning, to get her questions to him so they would be asked.

When asked why go through the effort or bother during the current health crisis to still have this judge speak to your class, Del Padre responded, "Citizenship is extremely important, if I don't instill in students the importance of being a good citizen and taking the responsibilities of things like jury duty seriously, then I have failed in my role as a Social Studies teacher.  They are worth it, so I made the extra effort."

Since this initial request, several more have come in from teaches across the state. Justice Daniel J. Crothers spoke via Zoom to a class of seniors at White Shield School on court functions and separation of powers. Judge Anthony Benson from the Northeast Judicial District, spoke with social studies students at Rolette Public School.

In the Northeast Central Judicial District, Judges Donald Hager, Jason McCarthy, and Lolita Romanick are working with Red River High School in Grand Forks to present to a number of high schools classes before the end of the school year. Judge Stephannie Stiel of the East Central Judicial District is planning a summer school session with a social studies teacher at Woodrow Wilson High School.

Teachers interested in the Courtrooms2Classrooms program should contact Lee Ann Barnhardt, the court’s education director, at lbarnhardt@ndcourts.gov for more information.